Seriously underwater properties are down by 1 million from 2015.

According to ATTOM Data Solutions, curator of the nation’s largest fused property database, the number of equity rich U.S. properties increased by 1.3 million from 2015. 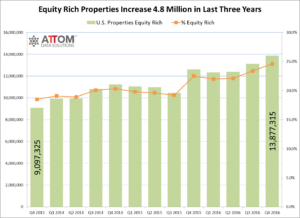 The ATTOM Data Solutions report shows that as of the end of 2016, there were 5.4 million (5,408,323) U.S. properties seriously underwater — where the combined loan amount secured by the property was at least 25% higher than the property’s estimated market value — a decrease of more than 1 million properties (1,028,058) from a year ago.

Daren Blomquist, senior vice president with ATTOM Data Solutions, said, “Meanwhile, the number of equity rich homeowners has increased by nearly 4.8 million over the past three years, a rate of about 1.6 million each year. Between 2000 and 2008, our data shows the average homeownership tenure nationwide was 4.26 years, but that average tenure has been trending steadily higher since 2009, reaching a new record high of 7.88 years for homeowners who sold in 2016.”